A new system based on our NexTrack FMS series with the latest Track’Air X-Track software and 8 seats included.

The NEW Sensor Operator Tablet is a sturdy Zebra XPAD L10. The design is at home indoors, outside, in freezing temperatures and extreme heat. With our X-Track software it creates a rugged version of our Sensor Operator Tablets. The tablet adapts ideally to any aircraft environment. The tablet software is exclusively configured to run the X-Track snapSHOT in-flight software module at startup and the operating system is entirely protected from unintentional corruption. The touchscreen is a high quality display with a wide viewing angle and backlighting suitable for indoor and outdoor use. The Pilot Display is the Apple iPad mini which wirelessly connects to the Sensor Operator Tablet and the Pilot also has the ability to select flight lines as well as other controls.

Do you have different equipment than we are showing? Since we manufacture our equipment onsite, most of our systems can be reconfigured, and we can create a custom mount configuration to fit your equipment. Contact us for a quotation. 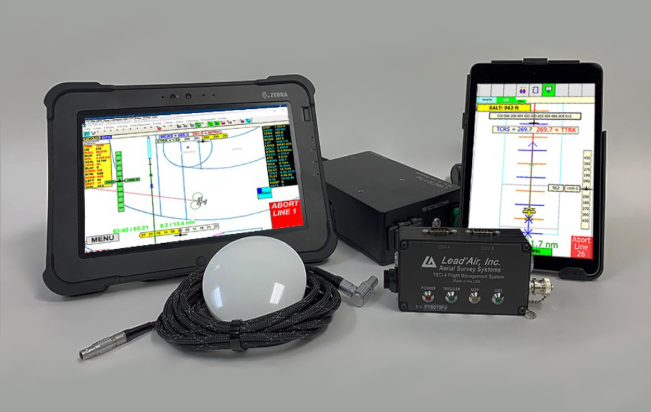 Included with the NexTrack 3 is a TECI-4 interface, Lead'Air Operator Tablet, wireless iPad Pilot display tablet, Garmin 18 Navigation GPS, and all required cables. The software includes the complete X-Track Suite of Windows based planning and reporting software as well as the snapSHOT32 control module for the in-aircraft acquisition process. These items, in combination with the complete Track’Air X-Track Software Suite create a powerful, compact and all-inclusive Flight Management System for today's demanding acquisition needs. 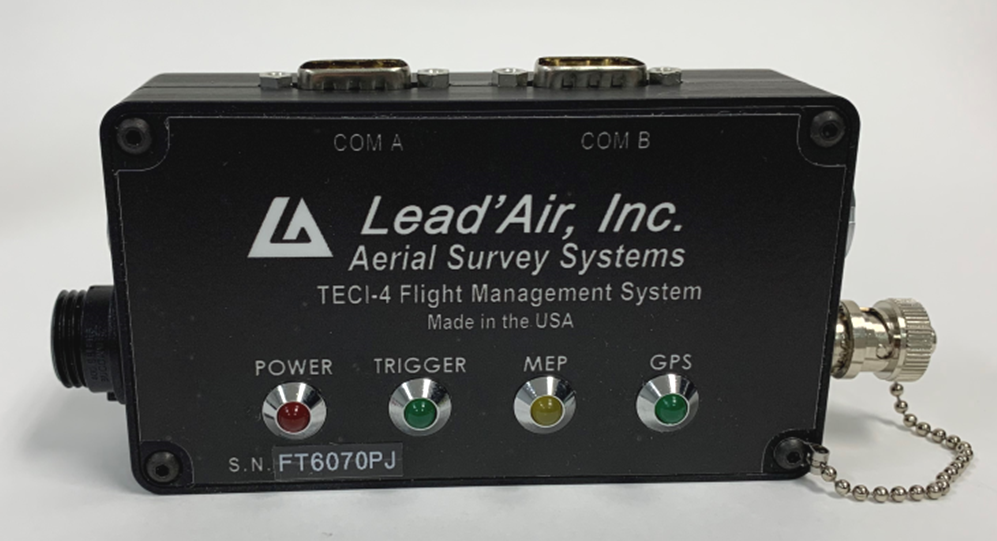 The TECI-4 System/Sensor Interface is not much larger than a cell phone. Connected to the System Operator Tablet via a USB connection, it is designed to draw it’s power directly from the Tablet. The TECI-4 Interface is delivered with its own 5 Hz 12 channel GPS receiver; however it can also be connected to almost any other GPS receivers that have NMEA output capabilities.

In combination with the TrackAir X-Track software on the Sensor Operator Tablet, the TECI-4 Interface triggers the sensor at pre-determined locations and records the positions with high accuracy. The system has the ability to also control "on / off" functions of many of the LiDAR scanning systems on the market.

The TECI-4 likewise performs many other tasks: exposing the details of the mission and the photo position on film (RC30, RMK TOP, etc.); automatically controlling all the camera functions, v/h, FMC, drift, etc. (with the necessary optional equipment) as well as interfacing with most camera mounts and stabilized platforms (Track’Air Steadytrack, PAV 30, GSM 3000, TAS, etc).

It can be used with all existing legacy mapping cameras from the Leica RC10 and RC30 to the Zeiss RMK and LMK large format cameras. Small/medium format film cameras, modern digital cameras (Microsoft Vexcel, Phase One, and others plus some LiDAR sensors are included. 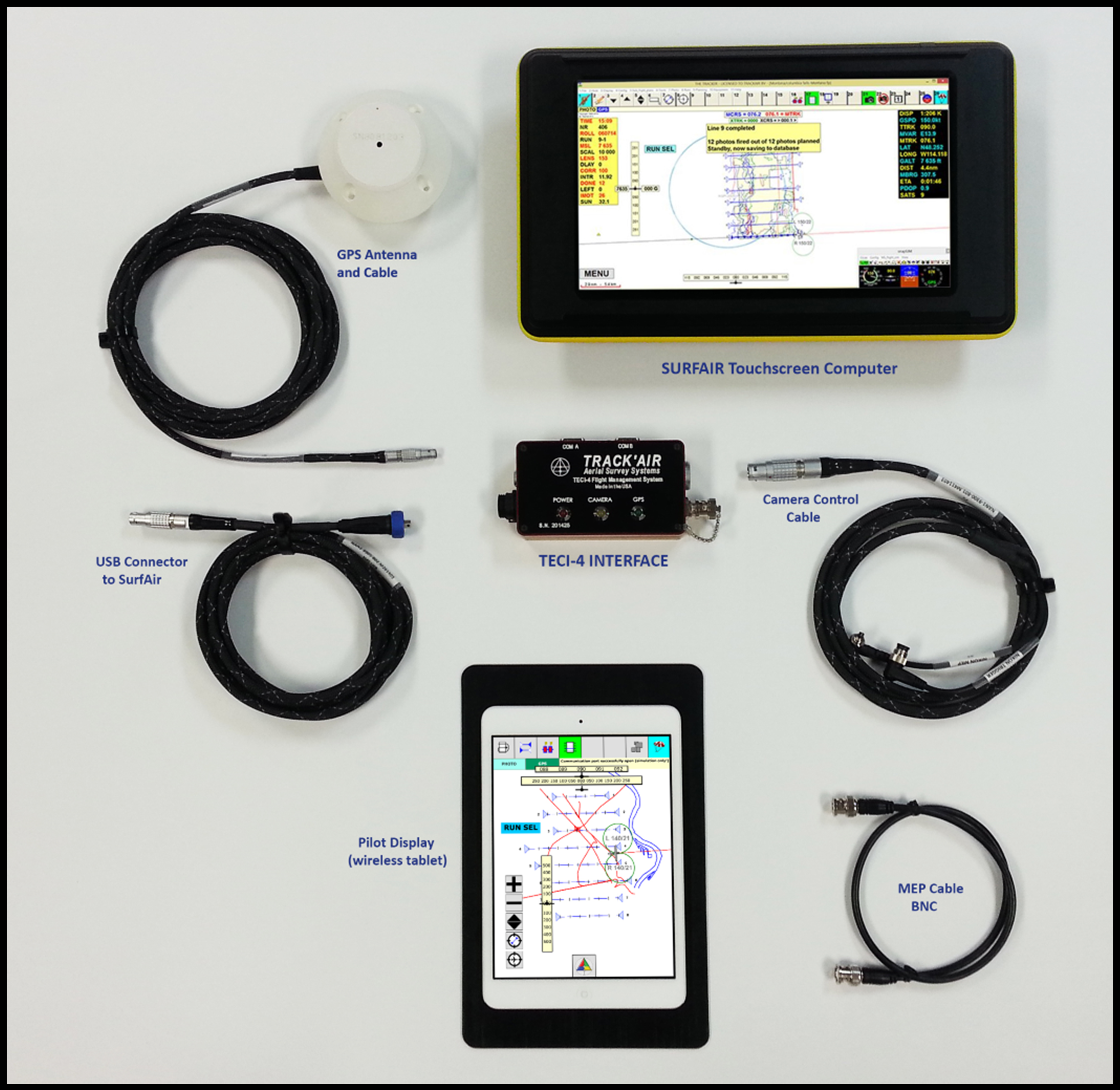 SnapSHOT is used to control the cameras and sensors and to provide navigation information to the pilot. SnapSHOT assists the crew in taking the best course of action by continually displaying the current status of the mission. Critical FAA (USA only) aeronautic information (restricted airspace, danger areas, international boundaries, etc) can be displayed together with the limits of the project. Raster maps and aeronautical charts can also be shown on the background.

SnapSHOT interfaces with most known survey cameras from small format digital cameras to the latest large format digital mapping cameras. It also manages many types of geophysical equipment (Lidar, frame scanners, etc). SnapSHOT includes a built in flight simulator which can be used by the crew to become rapidly familiar with the system. Additionally snapSHOT can be interfaced with MS flight simulator for advance familiarization and training with the software.

The Track’Air XTrack planning software includes 5 independent software modules tightly integrated by means of a common database. All these programs allow the use of raster maps and DEM data in the planning process. General descriptions of each module can be found below:

This module allows the planner to define project limits and background shapes by typing or loading coordinates into a specific text-driven header. The planner can import a variety of CAD files, including DXF, SHP, DCW, or KML files. You employ the data as area or background drawings during the flight planning and inflight acquisition process.

Additionally, the preparation of individual flight runs or a block of runs from existing coordinate text files can be added to a flight plan header. You can accomplish this by copy/pasting or direct typing. The module includes a graphical viewer for a quick inspection of the data.

This module allows you to open, import, or save a variety of georeferenced topographic maps and imagery from around the world. As well, it interfaces with Google Maps, Bing Maps, or Web Map Services available online. A selection of drawing tools is available for defining the project limits using screen digitizing on the available raster backgrounds.

From raster images, you can draw a single polygon as a project limit or create outlines of specific topographic features and details. Saving the raster image in the Database allows you to access it from most modules. The polygons or lines are then used by snapPLAN to create the flight plans. This module is essential during the planning process.

This module has a nearly countless number of options to create flight plans. With automated as well as manual functionality, the system allows you to create and optimize blocks of runs and single photo strips. The software supports geographical and grid-based pinpoint block planning. snapPLAN can manually or automatically adjust runs or strips for terrain altitude deviations from existing DEM data.

The module that is the hub of the Tracker32 Software Suite has a variety of management tools used to check and track the status and progress of projects. The access MDB database captures a tremendous amount of data during the acquisition. The Project Manager or flight planner employs this to finalize flight plans before missions as well as updating the office database with the data acquired or generated during the flight, from the acquisition computers.

The module name says it all. This module is a printing, plotting, and exporting utility specially designed for the automated production of aerial survey indices and report documents. An unlimited number of layouts for specific printers can be saved as a means of standardizing or customizing the index you wish to create. Customizable legends, titles, and adding your logo are all possible in this versatile software. Also, the planning and acquisition data can be exported as a dxf file to utilize in other CAD functional programs.

The data produced and processed by Tracker is saved to a built-in relational Microsoft ACCESS mdb database, which can be used by any number of programs. The benefits are:

Please feel free to check back at a later date.